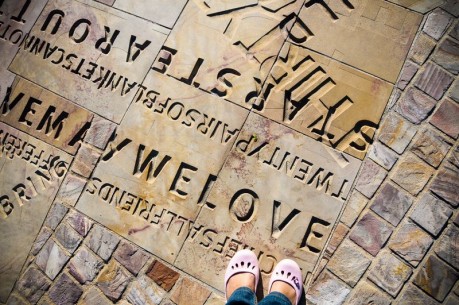 It has been a whirlwind few weeks as always in the HY household. Constant engagements, meetings, new people, images, laughs.

We are constantly bombarded by so many new sensations & outside stimuli that we scarcely slow down, stop & look at the familiarity around us. Perhaps being on the go, always on the move is a lot easier than slowing down to confront certain revelations which require effort to deal with, and that’s why people run.

And run. And run. They just keeping running.

Away from people, but I gather mostly they’re running away from themselves.

Granted, human relations are never simple. They don’t call us humans the most complex beings for nothing, but I suspect being complicated though, this is what we bring upon ourselves. Cluttered unnecessarily, intentionally distracted & constantly leaping to find greater heights, only to realise that you are still standing at the same spot.

Last few weeks have proved to be rather interesting. I took many leaps of faith (OK, yes Inception is getting to me… loved it but I shall not digress), crossed paths with many people – some for the first time, some to rekindle the past with; but all of it essentially were chances taken. Life being its wise old self has shown to me again, perhaps it is when you are least busy looking that you realise what you’ve been searching for all this while have been in front of you, gone unnoticed.

Simply due to one simple fact – your mind was not open to the idea that it could juuuust be in front of you :)

Would it be possible that through the numerous, taking many others to come into the picture to sieve out ONE, that mystified singular soul, who realises the exact same thing as you do?

Perhaps one has to go through many journeys to arrive at a destination. A checkpoint for both, before they can embark on many other journeys to other destinations in tandem.